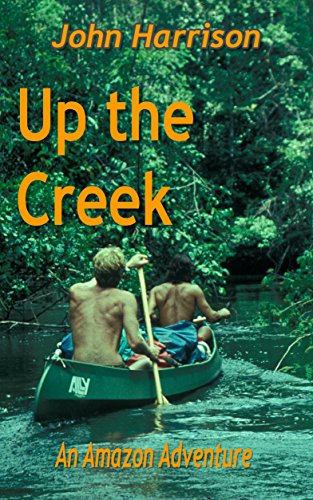 A hazardous and gruelling Amazonian journey recounted with humour and disarming honesty.
John Harrison's quest to reach the headwaters of the Jari River in Brazil and portage his canoe across the mountains into French Guiana is ambitious, flawed and a little bit insane. But the trip itself, full of unexpected encounters, crippling bouts of malaria, moments of intense emotion and hours of crushing boredom, is an inspiring tale, worthy of a place on any bookshelf of exploration and adventure.

'Mountaineers have many classic accounts of daring ascents of horribly difficult peaks. With 'Up the Creek', tropical forest lovers now have their own epic adventure. John Harrison decided to paddle a two-man canoe up the Jari river, which flows from the Guiana hills into the lower Amazon. It was a splendidly pointless journey, in the true 'because-it's-there' tradition. And it was extremely tough: seven months of physical hardship, disease, privation, technical skill and mental determination that make the average mountain climb seem a weekend ramble.
This book has all the ingredients of good travel writing. There is plenty of information, about flora and fauna, diseases, Daniel Ludwig's Jari Project, and some history. There is enough technical lore about canoes, hunting, fishing and camping to make this important reading for anyone planning a rain forest expedition. John Harrison has a good sense of humour and can be earthy or self-deprecatingly modest. He also appreciates the beauty of tall dark forests or sparkling rivers beyond the reach of human depredation..
It is the dangers and sufferings that make the strongest impression. They survived weeks of hauling up fearsome rapids, often wading in deep water, endless portages, shipwrecks, weary paddling, and hacking and hauling through barriers of fallen vegetation .......while wracked with disease.
John Harrison vividly reminded me of experiences on similar expeditions: panic at being lost, insects and their bites, hunger and the daydreams it induces, the all-pervading smell of leaf root, and the character changes caused by exhaustion and undernourishment. But he also conveys the love of forests and rivers that keep luring him back to Amazonia.' Dr John Hemming (formerly Director of the Royal Geographical Society) in the Geographical Magazine. Author of 'Tree of Rivers' and 'Naturalists in Paradise'.

'....an extremely hazardous canoe trip on one of the more obscure tributaries of that river about which I didn't think anything new and startling could now be written. How wrong one can be. He escaped death I don't know how many times in places where there was no hope of rescue. The style is the man: randy and rumbustious but never out of control. An admirable book by an admirable man who exposes himself mercilessly.' The Daily Telegraph

'Harrison was born a century too late. He should have been out there with Livingstone, Speke, Selous and all that lot.' Dervla Murphy.

'.......however grim the tale, as a record of courage and endurance it deserves to stand in an honoured place on any shelf devoted to the self-punishing experiences of Anglo-Saxons up the Amazon.' The Times Literary Supplement.


After seven canoeing expeditions to the Amazon, John Harrison is regarded as one of the world's experts on independent jungle exploration. He has also canoed the Niger and many rivers in North America and Europe, has been profiled by National Geographic TV, and chaired tropical forest workshops at the Royal Geographical Society.