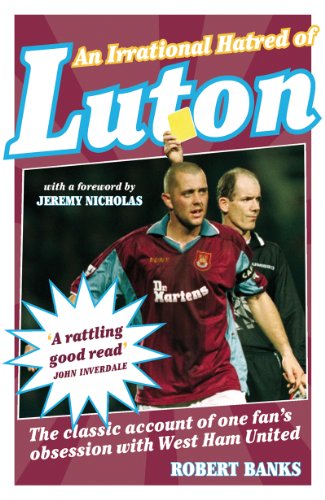 Somewhere in a parallel universe there is another Robert Banks, who is a season ticket holder at Manchester United and is a highly successful novel writer and adored by everyone in the world, regardless of footballing, religious or racial denomination. But is he happy? You bet the hell he is. But Robert Banks is not that man. Since childhood, he has been obsessed with West Ham United Football Club. A team of persistent and historical under-achievers. After all, the only thing West Ham ever brought home was the 1966 World Cup, but that doesn't count, apparently. Laugh out loud funny, and almost devastatingly poignant, AN IRRATIONAL HATRED OF LUTON is an odyssey through the world of a committed football supporter. A real-life Fever Pitch, and with a Hornby-esque deftness of tone, Banks' book shows how intricately in the life of a true fan, football interconnects with the everyday. Banks' friendships, relationships, work, emotions of joy and despair all take place against a backdrop of claret and blue. Then Saturday comes and he watches his team get thumped again. A compelling and hilarious journey into the nature of obsession.