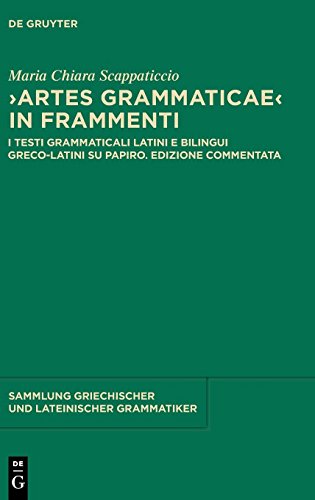 Críticas ""In short, this book is important both for its collection of primary texts and for its discussion, which raises new questions as well as contributing to old ones. It is to be hoped that the work will stimulate further debate about Latin grammatical texts and lead to the publication of more such materials, some of which must be lurking in the world's major papyrological collections.""Eleanor Dickey: BMCR 2016.05.17 Reseña del editor Artes Grammaticae in frammenti collects and scrutinizes all the known Latin and bilingual (Greek-Latin and Latin-Greek) grammatical texts on papyrus (1st cent. B.C. - VIth cent. A.D) in order to add further tesserae in the mosaic of our knowledge of forms, practices and circulation of Latin grammar and language and of Roman education, especially in the excentric and multilingual areas of the Empire. Ver Descripción del producto