Who's Better, Who's Best in Hockey?: Setting the Record Straight on the Top 50 Hockey Players of the Expansion Era por Steve Silverman 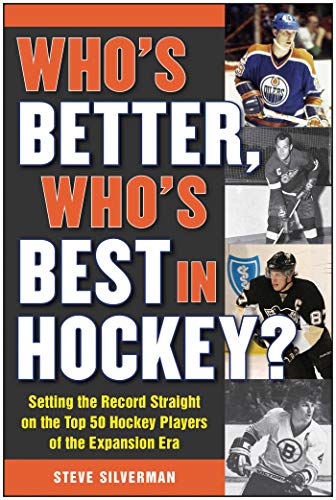 Reseña del editor Who are the best centers in NHL history? How about wingers? How can we objectively rate the performances of individual defensive players? And how can we make reasonable judgments about players at different positions? Who is the greatest hockey player of the Expansion Era? Bobby Orr? Wayne Gretzky? Gordie Howe? Such are the questions debated by hockey columnist Steve Silverman in Who's Better, Who's Best in Hockey? In this book, Silverman includes analytics to help evaluate NHL players who have dominated over the last fifty years. The result is a fascinating ranking of the best on the ice, including legendary players like Gordie Howe as well as present-day superstars like Sidney Crosby. Throughout, Silverman discusses the many considerations that must be made when comparing modern players with players of past decades and players at different positions. Including biographical essays on those top fifty players and vital statistics for their playing careers, Who's Better, Who's Best in Hockey? is a must-have for anyone who considers hockey to be more than just a sport. Skyhorse Publishing, as well as our Sports Publishing imprint, are proud to publish a broad range of books for readers interested in sports books about baseball, pro football, college football, pro and college basketball, hockey, or soccer, we have a book about your sport or your team. Whether you are a New York Yankees fan or hail from Red Sox nation; whether you are a die-hard Green Bay Packers or Dallas Cowboys fan; whether you root for the Kentucky Wildcats, Louisville Cardinals, UCLA Bruins, or Kansas Jayhawks; whether you route for the Boston Bruins, Toronto Maple Leafs, Montreal Canadiens, or Los Angeles Kings; we have a book for you. While not every title we publish becomes a New York Times bestseller or a national bestseller, we are committed to publishing books on subjects that are sometimes overlooked by other publishers and to authors whose work might not otherwise find a home. Biografía del autor Steve Silverman is an award-winning journalist who has been a featured hockey columnist for the Bleacher Report for over three years.