A Team of Their Own: How an International Sisterhood Made Olympic History por Seth Berkman 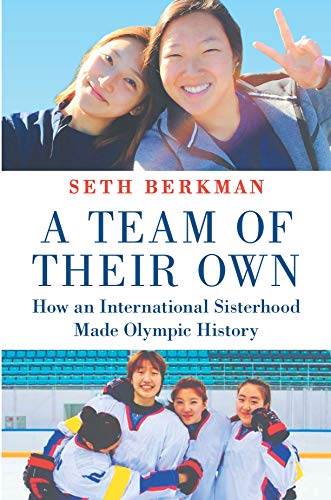 Críticas ""Berkman, a New York Times contributor who was born in Seoul and raised in New Jersey, does a fantastic job of providing historical context and capturing the tremendous sacrifices made by the players as well as the passion they shared for the sport. Readers will find themselves cheering for a team who began as political pawns but who ultimately showed the world the Olympic spirit in action, despite losing every game they played. A must-have for its slice of its Olympic history and its portrait of Korean culture."" --Booklist (starred review) ""This poignant story showcases the bonds of friendship over Olympic glory and will appeal to fans of women's sports and anyone who has experienced the special kinship that comes from being part of a team."" --Library Journal ""In this entertaining history, New York Times journalist Berkman follows the South Korean women's national hockey team for the year leading up to the 2018 Olympics... The author shines at describing the roller-coaster ride through the Olympics, during which the unified Korean team scored one of their only two goals of the tournament against Japan... Berkman unveils a great story of women's hockey that's sure to thrill those rooting for the underdog."" --Publishers Weekly ""A well-written, impassioned story of sports, friendship, and determination."" --Kirkus Reviews ""Berkman has the seasoned sportswriter's keen observational skills and gripping storytelling ability, combined with elegant, witty prose and a lot of heart."" --Euny Hong, author of The Birth of Korean Cool ""Seth Berkman's A Team of Their Own is a lively, crisply written rollercoaster of a book that tells the story of the women of South Korea's hockey team in the 2018 PyeongChang Winter Olympics."" --Michael Breen, author of The New Koreans ""Yes, the sport is often compared broadly to war. But what, specifically, does it have to do with geopolitics, grandstanding politicians, nuclear weapons, Kim Jong-un and three-quarters of a century of national division? To find out, read this impressively detailed account of the unified Korean women's ice hockey team and its starring role at the 2018 Winter Olympics."" --Bradley K. Martin, prizewinning author of Under the Loving Care of the Fatherly Leader: North Korea and the Kim Dynasty ""This is a gripping and emotional read. I learned so much about hockey, the Koreas, and the struggles women athletes face across the globe. Seth Berkman introduces you to the young women in his story with empathy and care. It's a classic tale of underdogs giving their all for the sport that they love...I'm ready to see the major motion picture. (Can someone get on that?)"" --Hannah Jewell, author of She Caused a Riot ""A poignant story of identity and belonging that resonates far beyond the world of elite women's hockey."" --Alice Stephens, author of Famous Adopted People ""This was a fascinating read about passion, dedication, and sacrifice. The hard work of the women of the South Korean women's national hockey team highlighted the lengths people are willing to go to pursue a dream. The dream of playing in the 2018 Winter Olympics drove these young women to push their bodies and their minds in extreme ways as they trained through injuries, adjusted career goals and college plans, challenged their familiar expectations, and pushed through preconceived notions about one another. Berkman helps the reader get to know each unique player showing how these very different women came together for a common goal, truly defining what makes a team. The bonds of the team are greatly challenged when, two weeks before the Olympics, government officials and the International Olympic Committee informed the women of the South Korean team that they'd have to make space for players for North Korea to join, forming a Unified women's hockey team. After years of training together, the makeup of the team was shifted dramatically, but the players overcame this challenge as they had so many others, by bolstering one another up, opening their hearts and arms, and focusing on being the best players they could be. I finished the book with a new understanding of life in South Korea and feeling inspired and moved by the powers of openness, dedication, and goodwill."" --Becca Anderson, author of The Book of Awesome Women ""Berkman crafts a moving account of women speaking up, leveraging their platform, and questioning the status quo that feels particularly apt in 2019."" -Dat Winning Reseña del editor The inspiring, unlikely story of the American, Canadian, South Korean and even North Korean women who joined together to form Korea&;s first Olympic ice hockey team.Two weeks before the opening ceremony of the 2018 Winter Olympics, South Korea&;s women&;s hockey team was forced into a predicament that no president, ambassador or general had been able to resolve in the sixty-five years since the end of the Korean War. Against all odds, the group of young women were able to bring North and South Korea closer than ever before.The team was built for this moment. They had been brought together from across the globe and from a wide variety of backgrounds&;concert pianist, actress, high school student, convenience store worker&;to make history. Now the special kinship they had developed would guide them through the biggest challenge of their careers. Suddenly thrust into an international spotlight, they showed the powerful meaning of what a unified Korea could resemble.In A Team of Their Own, Seth Berkman goes behind the scenes to tell the story of these young women as they became a team amid immense political pressure and personal turmoil, and ultimately gained worldwide acceptance on a journey that encapsulates the truest meanings of sport and family. Ver Descripción del producto