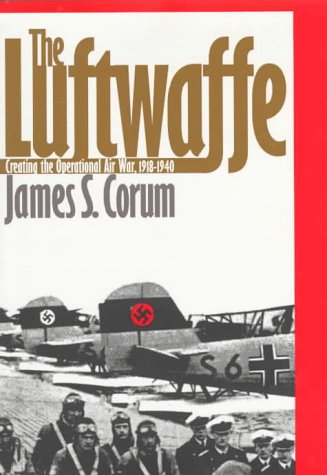 Críticas ""A distinguished and provocative book that makes a major contribution to the fields of air power history and German military history.""--Dennis Showalter, author of Tannenburg: Clash of Empires""A first-rate, convincing, and impeccably researched account of the forging of the Luftwaffe's operational doctrine that carried it through the opening campaigns of the Second World War.""--Richard R. Muller, author of The German Air War in Russia ""A great achievement that impresses by the author's comprehensive grasp of his subject.--Horst Boog, editor of The Conduct of the Air War in the Second World War ""Against the dogma that the Luftwaffe was merely a 'tactical air force, ' Corum provides some powerful arguments. His work is a necessary correction to the historical record.""--Klaus A. Maier, coauthor of the multivolume Germany and the Second World War ""The best account of the development of the Luftwaffe's operational doctrine and theory to appear in any language.""--Edward L. Homze, author of Arming the Luftwaffe: The Reich Air Ministry and the German Aircraft Industry ""This lucid and vigorously argued volume can be warmly recommended to everyone interested in the history of air power in the first half of the twentieth century.""--Brian Bond, author of The Pursuit of Victory and War and Society in Europe, 1870-1970 ""Belongs on the shelf of every serious student of German air power between the wars.""--Journal of Military History""This superb work marks Corum as one of the premier scholars of German military history in the United States.""--New York Military Affairs Symposium Newsletter ""Corum convincingly demolishes several myths, including beliefs that the Luftwaffe had no ideas beyond the support of ground forces and that its leadership in the Second World War lacked deep professional grounding.""--RUSI Journal ""A new and innovative explanation of why the Luftwaffe proved so formidable against its British and French rivals. an impressive and groundbreaking study.""--History Reviews of New Books ""An eye-opening appraisal of Germany's air forces from the post-World War I era through the early stages of World War II. Revisionist military history of a high order.""--Kirkus Reviews Reseña del editor At the end of World War I, the German military lay in ruins, forbidden any attempts to rebuild. But by the dawn of World War II, its army and air forces had both risen phoenix-like to conquer most of Europe. James Corum shows that the Luftwaffe's dramatic resurrection was remarkable and that it emphatically underscored the success of Germany's visionary interwar planning. Corum's study provides an account of the evolution of German military aviation theory, doctrine, war games and operations between the two world wars. It reveals how the Germans, in defiance of Versailles, thoroughly studied and tested the lessons of World War I, analyzed the emerging air doctrines of other nations, and experimented with innovative aviation technology to create the world's most powerful air force by 1940. Drawing heavily upon archival sources, Corum discloses the debates within the General Staff - led by the likes of Hans van Seeckt, Helmuth Wilberg, Wolfram von Richthofen and Walter Wever - about the future role of airpower and the problems of aligning aviation technology with air doctrine. Challenging previous accounts, he demolishes a number of myths. He demonstrates, for example, that Germany did not dismiss the potential of strategic bombing, did not embrace ""terror bombing"" of civilian populations, and was not heavily influenced by its popular culture's romance with aviation. Corum also illuminates Germany's comprehensive approach to highly mobile combined arms warfare, its secret research and training in the Soviet Union, and its remarkable successes during the Spanish Civil War. While focusing primarily on the interwar period, he extends his analysis into the early years of the war to examine the Luftwaffe's effectiveness in Poland and France, while exposing its flaws in the Battle of Britain. As a companion to Corum's acclaimed study of the German army between the wars, ""The Luftwaffe"" widens and deepens our understanding of one of the greatest fighting forces ever assembled and reminds us how ideas, as much as men and machines, can alter the fates of nations with stunning results.